A report just out from Resource Media on public communications strategies and "messaging" for ecosystem service policies leans heavily on the fascinating 2010 national opinion survey on "ecosystem services". They're straight up among the most interesting things I've read all year.  Anyone with any stake in ecosystem services should read them.

Because they're kind of, well, damning.

The punchlines are as follows: people HATE the terms "ecosystem services" and "natural capital"; the very concept that nature "serves" us is unappealing; abstract cases for markets are off-putting, and; while Americans across the political spectrum are deeply and strongly committed to valuing nature, dollars are the least preferred way of doing so.

And the money stat is this:  out of 16 terms used to describe the benefits of nature, "ecosystem services" ranked 13th, and "natural capital" ranked 15th.

Ok, "hate" is too strong a word, but you get the feeling that the pollsters found themselves asking the equivalent of "How do you feel about ice cream?  kittens?  the laughter of children?"  In describing their findings they kept using phrases like "across the board," "overwhelmingly," and  "strong intuitive belief".  Yes, in bold.  There was nothing subtle or equivocal about what they found: these terms that are now so widespread as to have become a master concept in economics and conservation are deeply unpopular with actual people.  Folks, we are in a bubble.

Is this really surprising?  Objectively, if you want to build a broad-based and popular policy movement involving communicating complexity to the lay public, the language of financial capital is probably not your go-to leitmotif.  That would be true even if we weren't amid a devastating national economic crisis widely known to be caused by the financialization of objects whose very existence is unclear and nonintuitive.

And it's not the case that people outside the bubble are simply waiting to be educated about "nature's value" (the term they ranked #1).  Both documents argue that attempting to educate people about the usefulness of the economic frame is badly misguided and likely to be resisted.  Rather, people are already deeply committed to valuing nature without necessarily pricing it, and simply want to know how pricing might work in actual situations that they care about.

Now, to a certain flavor of environmental economist, this is a nonsensical statement.  Value is unobservable; price is, by axiom, the best proxy of value, and is best found in a clearing market.  To talk about valuing benefits but resist pricing them is to resist the entire raison d'etre of environmental economics (but not ecological economics, necessarily): the internalizing of unpriced externalities.  It is, at least, an error to be corrected.  This flavor of economist commands so much academic and policy bandwidth that both proponents and opponents forget what a bizarre and somewhat pointy-headed view this is to most people. But much to their credit, both sets of authors go out of their way to shut down the instinct in readers which might say "Well, people just need to be better-educated on the issue!"

And as you dig into them, the hits keep coming:
Resource Media pushes a notion that seems right to me: there is not a strong constituency out there at the moment that is inherently suspicious of green infrastructure or ecosystem service policies -- but that may change, and so the time to develop an effective communication strategy is now.  In that sense I'm reminded of environmentalism circa 1970, or wetland policy circa 1988: it was possible for Nixon and his potential Democratic rivals (McGovern, Muskie, Nelson, etc.) to all jockey for the environmentalist vote and support environmentalism because nobody told them that it was a "Democratic" position.  Because it wasn't yet.  Likewise, George HW Bush could push for "no net loss" in 1988 because the partisan calculus of wetland advocacy hadn't really been settled in the way it clearly was by 1994.  Ditto cap-and-trade.  The point is that, well, history keeps moving, and the case for ecosystem services won't always be the custody of the kind of green capitalist, global policymaker, and academic TED-watching elites who tend to drive it today -- at some point it may become a political football, and we should make hay before that day arrives.

Resource Media is also trying to tell ES advocates something important: Stop trying to roll up three very separate kinds of projects into one term.  "Ecosystem services" is found in three distinct contexts:
They find that 90% of what's out there in writing is Making the Case, which is a huge problem, because 90% of what actual people care about are "incentives" and "alternatives".   Take a look at the opening lines of EPA's just-released four-pager on ES and watershed protection:


"Healthy, intact watersheds provide many ecosystem services that are necessary for our social and economic well-being.  These services include water filtration and storage, air filtration, carbon storage, nutrient cycling, soil formation, recreation, food and timber.  Many of these services have not been monetized and therefore the economic contributions of healthy intact ecosystems are difficult to replace and most often very difficult to engineer."

In one inch of copy, they require the reader to a) commit to monetary valuation of b) "ecosystem services" (only defined later), which are c) elided with the outcome of "healthy intact ecosystems".  Classic "making the case" talk.  Abstract as hell.  Calling for a paradigm shift before the reader has even sat down is a Bad Rhetorical Strategy.

The take-home message can be summarized thusly: 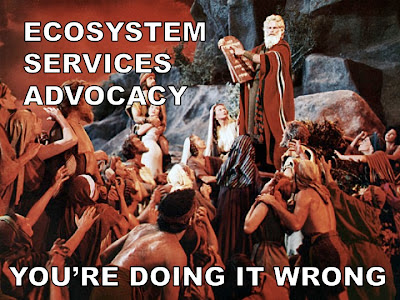 We usually start with the commandment: Thou Shalt Recognize Ecosystem Services.  Which is essentially saying "once you all start seeing nature as I see it, we can get somewhere."*  Not useful.  Why not start by figuring out what outcomes you all want, and maybe leaving the epistemological battles for later?  Part of the answer, of course, is that for a small minority the point is precisely  to promote "market thinking" rather than to achieve specific conservation outcomes.

These two reports are good medicine against that minority, and the vox pop nature of their testimony makes it all the stronger -- and more devastating to those deeply committed to metaphors  like "natural capital".  The authors are interested in how to move people and how to move projects, not in making cases in an echo chamber, which -- they both find gentle ways of saying -- is something academics and economists are very good at.  While I'm no stranger to making abstract cases in an echo chamber, I'm also a big fan of the notion that the uses of the ecosystem services concept are many, unforeseen, and not to be dictated.


The 2010 poll, btw, was commissioned by The Nature Conservancy and done by a group (FM3) which appears to do all kinds of polling; for this poll they phoned 802 registered voters and conducted focus groups involving people from across the political spectrum.


*a more precisely insulting version of this statement is "once you start consciously seeing nature as I know you already unconsciously do -- we can get somewhere".
Posted by Morgan Robertson at 6:25 AM 2 comments: