I can haz avoidance plz? 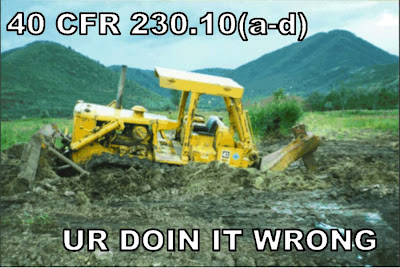 Posted by Morgan Robertson at 7:14 AM No comments:

EPRI released their big report on ecosystem service stacking this week -- a long-awaited analysis of a survey for which I was involved in the initial design.

Stacking is a topic which has largely flown under the radar -- there have been a handful of white-paper type reports, notably the one by  David Cooley and Lydia Olander at Duke's Nicholas School  last year, but absolutely nothing in the peer-reviewed literature.  But the question, to me, seems explosive in its consequences:  Can you establish more than one type of ES credit on a given piece of land? Can you, for example, sell carbon, water quality, endangered species habitat from the same site?  Currently the US regulatory answer is "no", but this is enforced by NO guidance or rule.  And with the role of REDD+ rising in the global carbon policy arena, expect to see a lot more talk about the way different ecosystem services overlay and interrelate.

Explosive, because the ability to derive many revenue streams from a single site comes into potential conflict with the ecological interrelationships between each service,  the documentation of which has vexed better minds than mine.  If you sell a carbon credit, how do you ensure that the underlying physical processes which created the carbon credit are not also intimately involved in creating other kinds of credits you might sell from the site? Could there be a more potent tension between the capitalist and ecological imperatives?  I'm going to leave it at that for the moment since I am working on a yet-to-be released paper with several co-authors on the topic.

A lot of good work here by Jessica Fox, Roy Gardner, and their crew.  Share and enjoy!
Posted by Morgan Robertson at 7:07 AM No comments:

I have no time for Facebook games -- hell, I don't have time to read for fun or watch TV.  But if you do, you might enjoy this Web Thing from the University of Washington - Bothell.   It's a Farmville-type game that involves restoring wetlands... Search for "UWB Wetlands" on FB.  Grist writes it up here with more snark than I can care enough to summon.

I mean, I'm not against computer games -- I spent most of 1985 playing Wizardry and Choplifter on my Apple ][e.  But in the current era of slippage between digital and physical worlds, does this game run the risk of having players think that this actually substitutes for effective conservation measures? I think EPA/Corps better issue guidance pronto making it crystal clear that playing UW Bothell Wetlands Restoration does not qualify as compensatory mitigation for unavoidable permitted impacts to wetlands, streams or other waters of the United States under 40 CFR 230.10(a-d).  OK?

Now, what they REALLY need is a Facebook game teaching us how to apply the draft jurisdiction guidance.  But be warned, if you apply "significant nexus" to include ecological relations, Scalia will totally FB block you.

(h/t to Patrick Bigger)
Posted by Morgan Robertson at 9:32 AM No comments:

All Your Ecosystem Services Are Belong to Us

Just noticed this from the USGS:

Of course, it's only a matter of time before SkyNet achieves consciousness and takes environmental conservation into its own hands.

Ok, aside from the obvious one-world-government, black-helicopter, panopticon jokes this inspires, it's also obviously the implicit goal of most ecosystem service accounting work.  It's rarely stated in such clear, techno-topian terms, but it underlies a lot of current policy talk.  It's worth thinking about the kind of knowledge requirements and institutional capacities this would involve, and the kind of society that this consistent datalink to nature would shape.

I think a lot of folks in the ecosystem services world might have a hard time seeing what, exactly, is wrong with USGS's vision here.  The basic critique from the other side is that one person's ecosystem services are another person's conditions of biological existence, and to have them continuously monitored, valued and recorded is... unsettling.  At the very least -- regardless of the merits of the conservation actions -- it unavoidably creates an unequal power relationship (or, more likely, reinforces an already-existing one) between the monitor and the monitored.
Posted by Morgan Robertson at 10:57 AM No comments:

I'm tempted to name this one after Ricardo Bayon, because it came up in our conversation a few years back, but I'll spare him.  We were talking about the problem I'd seen in Chicago and Minnesota where municipalities were enacting rules that prevented wetland credits from leaving their territory -- Elgin didn't want to lose its wetlands to rural Kane County, etc. -- even though both of them were in the same Corps service area.  This was really getting in the way of local wetland bankers.

Ricardo waved off the possibility of this happening in California.  But I suggested something like this: "Any environmental amenity sufficiently valuable to sustain a viable ecosystem service credit market is valuable enough to stimulate policies restricting its flight from any territory concerned about attracting an affluent residential tax base."

Sounded smart.  No idea at all if this has happened!
Posted by Morgan Robertson at 7:41 AM 2 comments:

"How do we balance the need for both precision and practicality when it comes to metrics?  Can we argue that while current measurement systems are imperfect, they are better than nothing? Is commitment to long-term monitoring and adaptive management a sufficient strategy to mitigate against the risks of incomplete or imprecise measurement systems? What’s “good enough” when it comes to metrics?"

I've been thinking about this for a long time -- in fact it seems like everything I've ever written boils down to "defining environmental commodities is HARD because ecology is complex and commodities need to be abstract".

Some of the responses delved into the ecological difficulties of creating accurate metrics, which I think is exactly the wrong problem (not that there's not a lot of work to do on that front).  Ecological criteria are already too complex for economies to handle.  Since we're talking in the language of "services", we're talking about things that are primarily economic in their identity whether or not there's actually a market for them (they might be used for indexical purposes -- green GDP etc -- rather than sold in markets).  So we're already in a fully economic world here, and the question is how to render ecological complexity in a form that is as abstract and transportable as a commodity.

Or, as the NRC put it in their 2005 book on the topic, studies must be "designed so that the output from the ecological models can be used as an input to the economic models".  This hierarchy will rankle some ecologists.

The market consequences of getting too complex, ecologically, with your metrics was put to me once by an EPA regulator in the following way:


"You can define a unit so that you’re going to have flourishing mitigation banking.  You can also define a unit so that, should there ever be one exchanged, it would be environmentally precise.  And those are at potentially different extremes… [You might end up with credits in] 'habitat for middle-aged great blue herons who don’t like shrimp', or something.  Obviously, I can’t imagine even trying to do that."

I consider this to be one of the real unresolvable paradoxes of environmental markets.  If a metric is ecologically precise enough to fully reflect the complexity of ecological systems, it will be so hard-to-measure and so specific to a site that it will tend to describe a commodity that cannot trade successfully in a market of sufficient thickness and volume to sustain trade.  If a metric is abstract enough to describe a commodity which can trade at volume, it will tend to fail to describe ecological complexity.

In short, as the ecological sensitivity of a metric increases, the fungibility of the commodity it describes decreases.  Empirically, I saw this as wetland credit markets began to evolve -- the metrics actualy got simpler as pressures for increased volume come to bear.  The Minnesota wetland banking metrics from the 1980s, for example, back before there was a private market, required you to navigate a blizzard of lookup tables to figure out what your mitigation ratio would be.  The metrics for the first mitigation bank in the country (Tenneco LaTerre) depreciated credits over time based on the dynamism of the coastal ecological/geomorphic environment!  As private markets became common, the acre became the unit of assessment, and assessment criteria were dumbed down.  But with the trend toward functional assessment we're seeing a push to complicate the assessment -- so the paradox above creates a stiff headwind, but not an absolute bar.  Will be interesting to see how far it can go.


ps: I originally titled this post "The Ecology Paradox in Ecosystem Services", which was boo-ring.  Then I named it after the EPA regulator who provided the quotation -- but aside from being a violation of our confidentiality agreement, who wants a paradox named after them??  It seems like something that might have driven the eponymous person mad.  So I rather grandiosely named it after myself, since I've published about it since 2004 and I don't know if anyone else has formulated it, and am assuring you that it's not driving me mad or even keeping me up at night.  If anyone can find something similar published elsewhere, please post up or send me a note and I'll give credit where it is due.
edit: after almost a year of blogging I've had to concede that someone besides me actually reads it -- those thousand hits couldn't all have come from spambots.  I'm far too Midwestern to engage in that kind of egomania in public, so I came up with a far better name for the concept!
Posted by Morgan Robertson at 9:30 AM No comments:

"[A lost decade is] the best outcome on the table in South Africa. It represents a gaping political failure: countries agreed in 2007 to sign a broad, global deal in Copenhagen in 2009 to come into force four years later. Two years on, they are now poised to commit to sign in 2015 an agreement to come into force in 2020, instead."


This manages to remind me of both Weight Watchers and structural adjustment at the same time.
Posted by Morgan Robertson at 9:25 AM No comments: