You may be familiar with the concept of ecosystem service "stacking" -- if not, read Alice Kenny's wonderful piece about it for EcosystemMarketplace.com.  Essentially, the idea is that because a single parcel of land can contain many different ecosystem functions, and therefore services, that one should be able to sell many different types of environmental credits from a single parcel of land.

The debate over whether this is "additional" or "double dipping" or even legal has been very interesting but very small, since Jessica Fox first wrote about it in 2006 (although I'd been hearing wetland bankers spitballing he concept since I first started going to the NMBA conferences in 2000).  But here's been almost nothing to go on except hot air -- actual cases of stacking almost don't exist.  There was an arguably accidental case in which a wetland banker in North Carolina was able to sell water quality credits from a wetland bank that had already sold all its credits, but this appears to have been more a matter of unclear rules and entrepreneurial enthusiasm rather than a consciously-structured stacked market.  There are combination wetland and species banks in California which are often called "stacked", but are definitely not stacked:  while each parcel can contain either ESA species credits and wetland credits, when a parcel is used to compensate for wetland impacts, it then becomes ineligible to compensate for ESA impacts.  This is not stacking.

THIS is stacking (courtesy of Jessica Fox, Roy Gardner, and Todd Maki 2011): 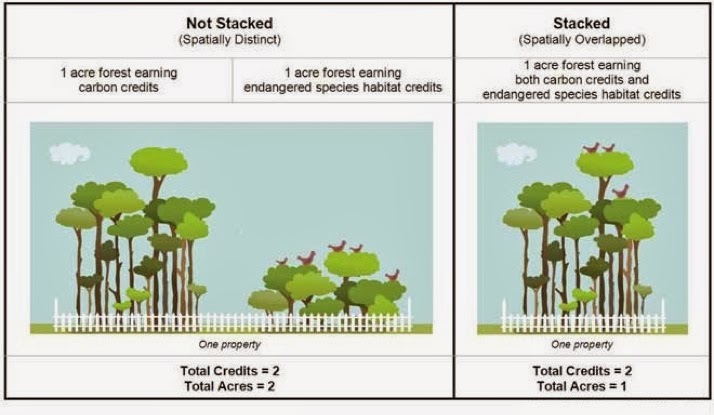 The only real case of stacking that I know of is the Willamette Partnership's site at Half Mile Lane outside of Portland, a pilot project organized by the US EPA and the Oregon Department of State Lands to create a site containing several accounting units, with each unit containing many kinds of credit.  Some units combine wetland/stream, water quality (temperature), and salmonid habitat, and one kind of credit can be sold without the others disappearing.  It's a fascinating case, and I talk about it in a paper coming out in Frontiers in Environment and Ecology with a bunch of other folks soon.

But a new case has just cropped up, from the Sauk River in Minnesota.  The Conservation Marketplace of Minnesota and the American Farmland Trust are launching a project in the Sauk watershed to develop carbon credits stacked on water quality credits, primarily on ag lands, to provide credits both to the global carbon market and to point-source polluters holding NPDES permits locally.  As with many ecosystem service pilots, from the farmer's end it probably looks a lot like any other ag support program like CRP or EQIP, in which they receive money for environmental improvements without having to become "environmental entrepreneurs" or marketers of any kind.  Minnesota ran its private wetland banking sector that way for years, with the "bankers" being mainly farmers who registered their restored wetlands with the state BWSR, and this is following true to form.  The Stearns County SWCD is the executing agency, and the Conservation Marketplace of Minnesota itself was set up with USDA Conservation Innovation Grant money.  It seems that a lot of the energy behind ecosystem services payment systems continues to be aimed at filling the gap in environmental regulations that provides exemptions to the agricultural sector.

I find it interesting that CMM and AFT are embracing the term "stacking" -- see especially AFT's publicity here -- a term which is technical and wonky and probably a bit off-putting.  It'll be interesting to see where this goes.


Posted by Morgan Robertson at 1:09 PM No comments: