But is it really Stacking?

So I've been standing up in front of some very smart people this year -- at a meeting of the Chesapeake Bay Environmental Markets regulators' forum, and again at the ACES conference in Washington DC -- and saying things like "what the ESA/404 banks in California do is NOT stacking, and what the Willamette Partnership does IS stacking."  It takes some gumption to say this in front of people like Deblyn Mead (who manages the ESA banking program) and Chris Hartley (OEM), because environmental markets are literally pretty much what these folks say they are.

In an effort to provide some conceptual clarity to the realm of stacking, myself and 5 other authors put out a paper in Frontiers in Ecology and the Environment last March called "Stacking Ecosystem Services".  Faced with a multitude of definitions of stacking, we broke it down this way:

Now, that helps a bit.  There's a real difference between conceiving of an ecosystem as a set of functions or services, which is done all the time in settings like REDD+ and systems ecology, and actually taking the further step of transacting those services individually.

We believe that stacking requires the spatial superposition of more than one transactible credit type. This rules out what I call a "Schrödinger's Credit" situation, where a piece of land can potentially be transacted as many different credit types, but once that transaction has occurred, no further transactions on that space are possible.  Like Schrödinger's famous Cat, prior to the transaction the credit exists in many possible states, and true nature of the credit is not observable until the transaction is made.  This would describe the approach to crediting at FWS' habitat banks that sell credits for multiple habitat types, and combined ESA/404 banks.

By this logic, what Willamette Partnership does is stacking.  On a given piece of land, multiple credit types are simultaneously transactible: salmon habitat, water quality, wetlands.  When one salmon credit is transacted, the other credit types are still available.

However.  TWP measures their credits using system developed by Parametrix, Inc. called "Ecometrix".  One can argue (as we do in our paper) that the functions which support the existence of the salmon credit are also involved in supporting the water quality and wetlands credits -- and so transacting one credit should affect the number of credits of other types that remain to be sold.  [footnote: for at least two economists reviewing our paper, this was such an outlandish claim as to disqualify the paper from publication.]  And Ecometrix can accommodate this interrelationship: If "salmon habitat" is 70% related to "water quality", then the sale of one salmon habitat credit can reduce the number of water quality credits still available by 70% of a credit.  This is still a stacked market, just one that recognizes the interconnection between the stacked credit types.

The reason Willamette Partnership's market is not stacked, I was told, is that the interrelationship between all credit types is set at 100%.  That is, the sale of one salmon credit requires the full removal of a similar proportion of wetland and water quality credits from the ledger. So this could instead be considered a form of credit bundling -- where the sale of one salmon habitat credit also "comes with" one of each of the other credit types.  In fact, the opposite of stacking. 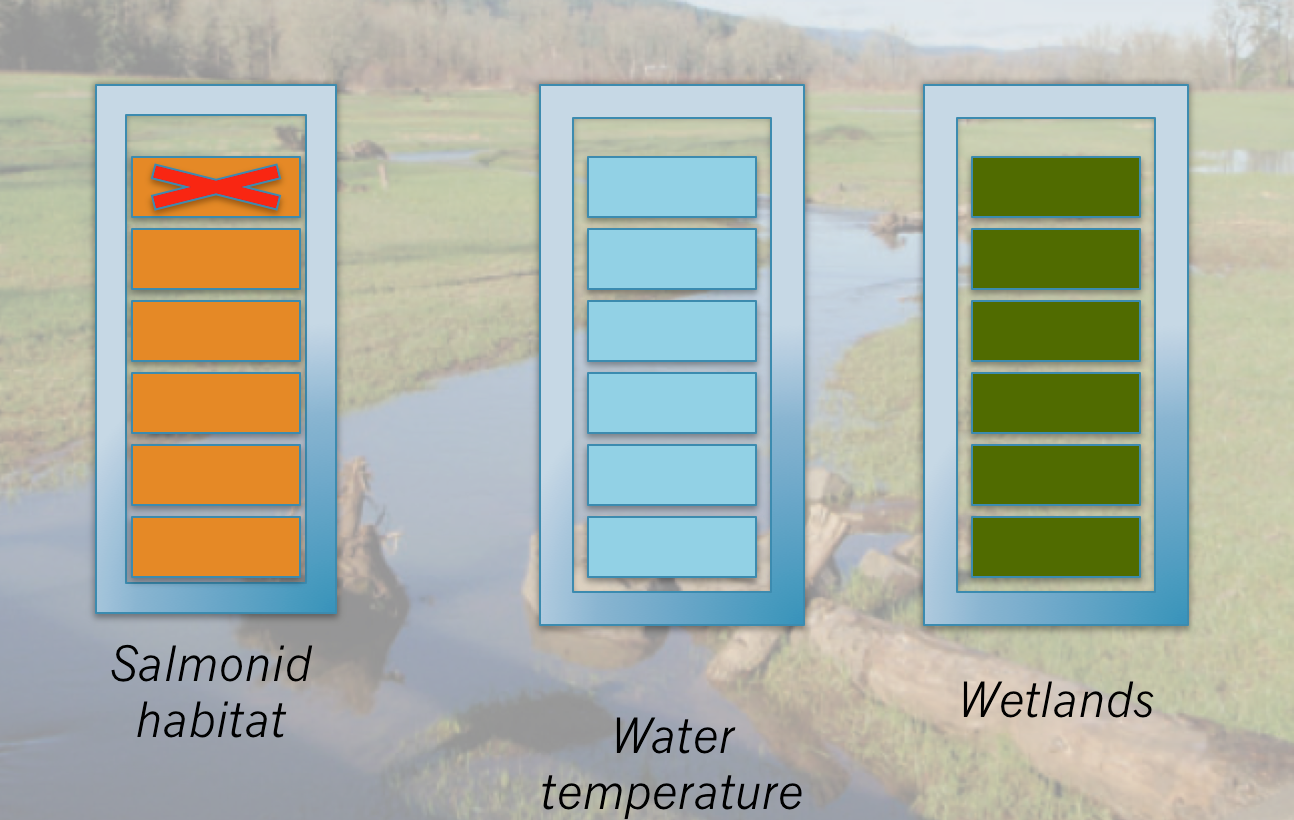 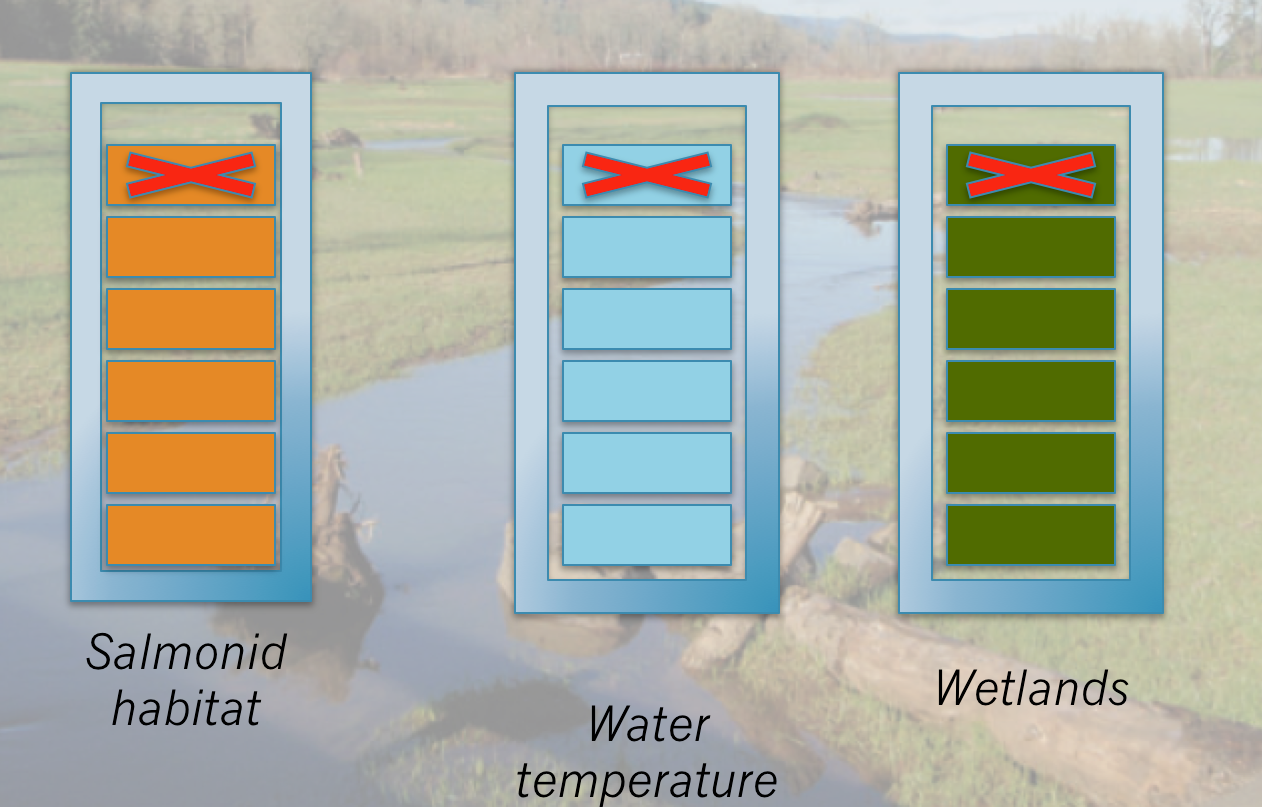 I get this argument, and I agree to a certain extent.  Except that the structure of the market is still that of a stacked market, where multiple single credit types are transactable and certain assumptions are made about the relationship between them.  Whether the assumption is that they are 0% related or 100% related doesn't change the structure of the market.  It doesn't make much sense to say that a market where the relationship is set at 99% is stacking, and where it is set at 100% it is something else entirely, for which we need a different name.

For me, a bundled ecosystem service credit market has a structure in which there is a single ecosystem service credit commodity, say "salmon habitat", whose relationships with other services on the site are recognized, relevant, and may even affect the number of credits available.  But they are not defined as separate commodities.  Imagine a sound mixing board with a single fader.  The number of credits available can increase or decrease, and the status of other services is not accounted for in credits.

A stacked ecosystem service credit market, on the other hand, is more like a multi-channel mixing board where the faders are connected with servos.  When one is decreased, the others can change as well.  Move the salmon credit fader down a notch, and the servos connecting it to the other faders move them down as well.  10%, 70%, 100% -- it doesn't matter, it's still the structure of a stacked market. 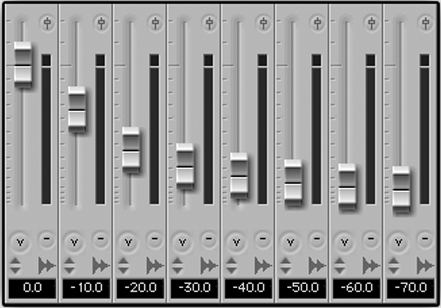 Outcomes are a different question, and I think it can reasonably be said that the Willamette Partnership's system produces outcomes very much like a bundled credit market.  But that doesn't make it a bundled credit market.  By the same token, a 100-channel sound board can be made to produce a sound identical to a single-channel system.  But that shouldn't hide the fact that it is in fact something much more interesting and complicated.


UPDATE: Response from a reader who should know, presenting the counterargument and a different analogy.  Soundboard Faders or Chemical Compounds? Discuss!

"I believe that the WP credits/market is bundled (“credits representing a collection of conceptually discrete but spatially overlapping ecosystem services as single commodities”)- so long as the market rules or underlying science does not allow for unbundling. Their credits can offset either WQ or fish habitat impacts, but not both unless they are part of the same mitigation action (WQ and fish habitat), and only then if approved by the appropriate regulatory agencies.

For example, a riparian buffer improves water quality and fish habitat, in a bundled scenario the permitee would be allowed to purchase the credit either as a WQ credit or a habitat credit, or as a credit that includes both WQ and habitat BUT, due to the nature of the credit would be unable to separate it into a WQ credit and a fish credit for use in different mitigation actions.

Conversely, consider a riparian buffer where wood duck nesting boxes have been installed, the nesting boxes provide spatially overlapping ecosystem services which could be sold as separate commodities (with approval of the regulatory agencies and market administrator), wherein the activities that generate the WQ/fish habitat credits and wood duck credits function independently.

From a pragmatic standpoint, drawing the distinction between stacked and bundled credits is an effort to reduce uncertainty surrounding the rules governing market transactions, and the real value is – as you suggest - acknowledging that there is “something more interesting and complicated” in acknowledging that there is value in the linked ecosystem services provided by the conservation actions."


Posted by Morgan Robertson at 9:45 AM No comments: