Fresh off the presses from Progress in Human Geography, a paper I wrote with Jessica Dempsey of the University of Victoria entitled Ecosystem Services: Tensions, Impurities, and Points of Engagement within Neoliberalism.

The nutshell is that ecosystem services, both as economic theory and as policy, has plenty of very interesting internal fault lines and inconsistencies that make it a flexible and adaptive concept whose destination is unknown.  It hardly resembles the cartoon, straightjacketed by market logic, that is often straw-manned by both critics and advocates of market-based policy.

Heads up: American Carbon Registry came out in October with a methodology for defining carbon credits in wetland restoration sites along the Gulf coast.  As they note, deductions for methane will be important and perhaps significant -- it will be very interesting to see how many credits this methodology defines, and whether the market believes in it.

Edit: And a new one here for coastal wetland restoration under the Voluntary Carbon Standard.


Posted by Morgan Robertson at 12:50 PM No comments:

My friend Becca Madsen at Madsen Environmental has done great work in advancing the merger of the rather nerdy if not actually straightlaced world of ecosystem services policy with the meme-driven communicative style of the modern internet.

I am of course in favor of this (as should be clear from my earlier posts), because something, ANYthing, is good if it helps us break through the wall that separates normal, everyday speech from policy talk.  And if it's not said with kittens or bad grammar -- does it really count as speech anymore?
Kids these days. 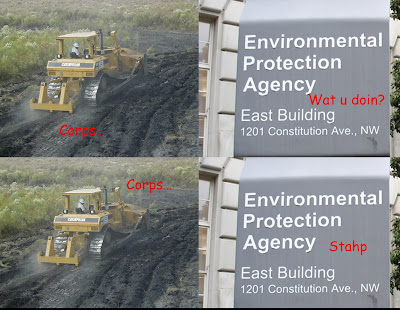 Posted by Morgan Robertson at 1:10 PM No comments:

I recently had an experience that reminded me of what a distinct and awesome group of people environmental regulators are, and how hard their job is in coordinating between science, stakeholders and blackletter law.  They do have their share of quirks, which I came to admire (and adopt) over my time at EPA.  I scrawled this list some time ago -- it doesn't really refer to any particular people, but some of you may see yourselves reflected... I certainly do.

10. All flora and fauna present at an impact or compensation site are "critters".

9. No matter how much the Corps/EPA/NMFS/USDA/FWS pisses you off, when push comes to shove they are "our sister agency".

8. Every Corps district staffer has the innate right to complain about how long it took to train in the last District Commander.

7. Every EPA regional staffer has the innate right to complain about the lawyers and politicos up at Headquarters.

5. Corps and EPA would feel secretly neglected if USDA and FHWA stopped trying to tell them how to administer the permit program.

4. Sure, they'd LOVE to handle that HQ data-call/process-mapping initiative/state assumption proposal.  Not.

3. What we say: "Your agency needs better monitoring and reporting protocols on your conservation grant projects."
What we mean: "I'm just jealous at the size of your grants budget."

2. Everyone has a story about the time they did wetland delineations [in 2 feet of snow/in the century's worst drought/while being attacked by a doberman] and what they have found in wetlands [a '57 Plymouth/4,000 golf balls/Jimmy Hoffa].

1. A Corps PM, an EPA staff scientist, and an NRCS project officer walk into a bar, and the bartender pours each of them a shot of 30 year-old scotch.  The Corps PM says "that looks isolated and non-jurisdictional", and drains it.  The NRCS staffer says "this was converted from grain prior to December 23, 1985", and drains it.  The EPA staffer
a) says "We need additional monitoring data -- pour me three more."
b) says "I have to assess the physical, chemical and biotic integrity of this resource," and -- takes it back to the lab for analysis.
c) slaps a (c) veto on the bottle and makes off with it.


Posted by Morgan Robertson at 1:56 PM No comments:

I've had a wonderful time as a faculty member at the University of Kentucky, and it is truly a stellar Department of Geography, with colleagues that can't be beat.  But it's time to for me to return to my Midwestern roots -- I've accepted an Assistant Professor position at the University of Wisconsin - Madison, and we will be relocating in December.

First, let me pause to remember a giant of physical geography and a father of fluvial geomorphology -- Wisconsin professor Jim Knox passed on October 6th, just after retiring last spring.  A dedicated scholar, a winner of almost every major award in our discipline, and one of the truly great mentorly characters ever to wander Science Hall and the hills of southwestern Wisconsin.  It was once said to me that he spent his life trying to understand the river that flowed through his boyhood backyard -- that seems like the best way to spend one's life as a scholar.

Second, let me in the spirit of promoting my new department, boast about the UW-Madison Geography student who (along with two others) won the 2012 NACIS Student Dynamic Map Competition for creating an interactive map -- The Wetlands Gem Viewer -- "developed in partnership with the Wisconsin Wetlands Association with the goal of providing an online and engaging spatial catalog of information about critical wetlands areas in the Milwaukee metropolitan area."

Video tutorial and live demo of the award-winning interactive map.  Keep an eye on those Cheeseheads -- they'll map the wetlands from right under your feet.


Posted by Morgan Robertson at 8:08 PM No comments: